Cooper Diers IS OUR sixth ARTIST IN RESIDENCE (AIR) AT SHEBOYGAN NORTH HIGH SCHOOL. He is our SPRING 2017 Air.

Below are the performances of the graphic score for the Vocal Spring Recital (including a backstage clip of the students working through the piece before taking it to the stage). People attending the concert were encouraged to come up to a table with the paper and markers and draw, write, make a symbol or mark and it would be performed as music later in the evening. The audience and the performing students seemed to equally enjoy the experience and it was a real treat for me to be a part of the creation of it. 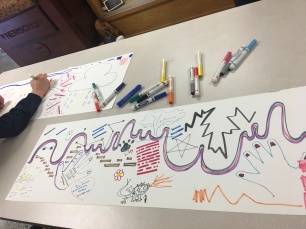 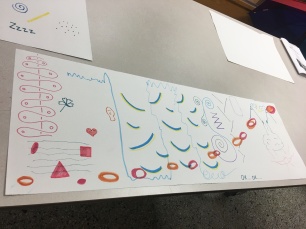 Last week was significant for me in that I was able to meet with some of North’s music department and present to a few classes the concept of graphic notation in an attempt to bridge the disciplinary divide of visual art and music. For examples of graphic scores and their realizations, I showed the students a video of composer György Ligeti’s piece, “Artikulation” (https://www.youtube.com/watch?v=71hNl_skTZQ), which was composed for electronics and displays the visual/audio relation in a really direct way. The other example was Christian Marclay’s conceptual installation that invited the public to write and draw onto a chalkboard that was then interpreted by Swedish saxophonist, Mats Gustafsson (https://www.youtube.com/watch?v=hMajRViyqrI), which reveals the openness to translating images to sound and how much the performer can really turn a graphic composition into his or her own expression. One of the choir classes took to the idea quite eagerly and far exceeded my expectations for the proposed project. The students divided into four groups and I provided paper and markers for them to create their own graphic compositions. They determined the images, colors, and form of the piece, and had their own instructions for what each component meant. Each group then performed their composition for the others and then mixed the groups up and different students then translated from scores that they did not contribute to visually to reveal not only what could change in translation from a different performer, but also the consistency of the sounds that were associated to certain symbols. As a part of the spring recital that they will perform on May 15th, the students suggested having a large piece of paper and markers outside of the auditorium, so when parents and the public come to attend they are encouraged to draw and write onto the paper that will then become the graphic score that is interpreted later in the evening. The willingness of the students to take on such an ambitious task is one of the more satisfying results of this residency. In a time and environment that has so much to do with preparation, premeditation, and compartmentalization in terms of personal, social, and informational organization, this ambiguity and highly abstracted approach channels an indescribably vital part of life; improvisation- having to make decisions on the spot and commit to them, while also suggesting the unfixed nature of much of life that allows for revisitation and reinterpretation of any given content in an almost limitless capacity.

Pictured below are the realized scores and photos of the choir groups working on and discussing the processes of translation for the compositions they created. 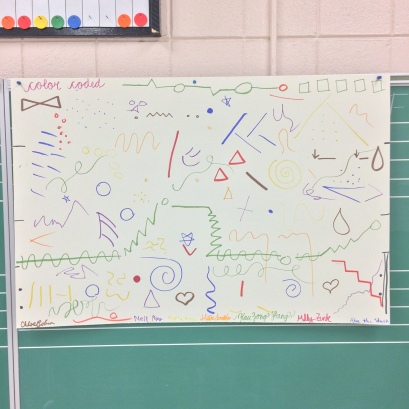 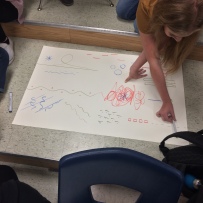 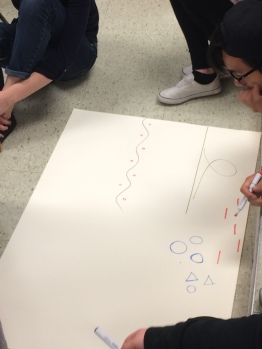 Shortly after beginning the residency, I was approached by the Honors Humanities teacher, Mr. Chad Soik, who I had the distinct privilege of calling an instructor when I was a student at North for his Film Study course. His professorial nature sets a different tone for the high school academic environment, which seems crucial in the lofty, ambiguous, and elemental aspects of Humanities. He carefully presents content for the students to decipher and grapple with and I have been sitting in with the class for nearly the entire semester, getting to be a fly on the wall and absorb a sample of this generation’s outlook and interpretation on the profundity of the history of human existence. To help deepen this class, Chad allots a week of creativity at the quarter mark for the students to come up with an artistic way of translating what they have learned in that time. While my role was marginal, I couldn’t help but feel connected to the project they came up with and that it reflected some crucial aspects of my work. The students used the ceiling of the classroom to construct a string sculpture, using a single strand from one corner to the cross-corner of the room that represented what they felt to be Greek literature’s central theme of Fate and Destiny. This string is the predetermined outcome of a given Greek character. Additional strings were then added on to the ‘String of Destiny’, with one significant provision: that the other end of the string had to eventually connect back to the Destiny string, conveying the idea that while a character may deviate and make his or her own decisions, or push against prophecy, that eventually their choices would lead them back to what was already determined. This restriction of method with their sculpture is akin to my working philosophy; Expansion within limited means, and has a connection to the series of line segments that I have been creating as a part of my residency.

Pictured below (left): The ARCANA series, compiled and edited by John Zorn. These books are a collection of essays, writings, poems, and peculiarities from a plethora of composers, performers, musicians, improvisors, inventors, theorizers, and philosophizers. To have access to individuals, regardless of their medium, exploring the unique process and perspectives with which their work derives is intimately inspiring and reveals the parallels that one may have with other artists as much as it sheds light on previously unknown concepts, methods and approaches.

Pictured below (right): Beyond using blotching, dripping, and working with gravity and time, the toothpick is the only actual utensil that I work with to manipulate ink. The restriction of this process compels me to find interesting ways to expand the possibilities of texture, contour, color, as well as movement, composition, and dimensionality. There is a recurring conceptual interest that seems fixated on implementation and application of techniques; in the moment creation.

A considerable part of what the ARCANA series documents aligns quite well with the primary focus of my creative work being centered around process. The activity of making, playing, creating – in and of itself – is, for me, an infinite state of reactive exchange, wherein the materials are responding to the ‘maker’ and the ‘maker’ is responding to the materials. English Saxophonist, Evan Parker, used the term ‘Biofeedback’ to describe that ongoing relationship between instrument and improviser/musician. That has just as much validity in visual art and I like to think improvising and improviser are terms equally effective for describing the visual artist who creates with a focus on process and the real-time activity of making. The ‘product’ at the end becomes a container of previous activity, which can contribute to the nature of an art piece being such a stimulating object.

There is another aspect of this audio/visual cross-pollination that I would like to explore within the remaining time of my residency; to create a graphic score and coordinate with a small ensemble within the music department to perform it. Graphic notation is a process of using images and nontraditional notation cues to communicate musical instructions in the same way as conventional notation. However, depending on the nature of the composer and the intentions of the composition, the interpretations by musicians can be wildly individual and unique from one performance to another. This unfixed quality keeps these works of visual/audio hybrids in that active state of exchange, where the ‘product’ is always in process- bridging a synthetic gap of improvisation and composition… Parameters are set and the outcome is unknown… 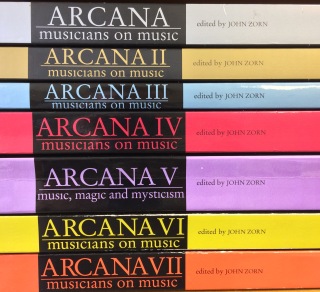 The Arcana Book Series (to date)

Update (February 27th, 2017): Over the last few weeks of my residency, there have been a few opportunities to integrate with some of the faculty and student body. One such opportunity has been participating in one of the special needs groups during their art-making time. Due to my interest in music and filtering most of how I experience through some sort of musical component, listening has been an inseparable part of my visual endeavors. Using that as a template, the students and myself worked on ‘drawing what we hear’. For the listening occasion, I brought in Art Blakey’s Afro-Drum Ensemble recording “The African Beat” (Blue Note Records, 1962) due to its focus on drums, its highly rhythmic activity, and, subjectively speaking, the incredible humanism that it exudes. The want was to generate a colorful and imaginative auditory experience that could prompt everyone to create in a similar fashion. Something interesting for me is the parallels of African drumming’s use of polyrhythms, which allow each player space to create something unique but contribute to a synthesized whole, and the class dynamic of everyone working on individual images while participating as a group. This simultaneity of individualism and collectivism is of extreme importance to me and suggests the basis for humanity. 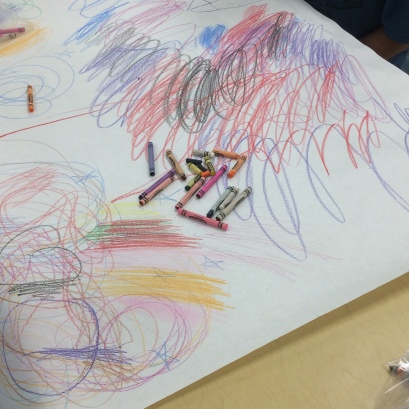 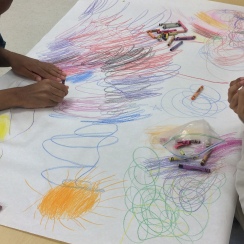 My own drawing for our “draw what you hear” series

Pictured below are inkings in progress that will eventually be part of what has been an ongoing series, collectively referred to as the “Eggs of Ancient Birds”. One of the conceptual aspects that drives a great deal of my creative output is the idea of expansion within limited means. For this series, by restricting myself to the ovular shape and allowing myself only a toothpick to manipulate the various inks, there is a heightened focus on the discovery of possibilities within. Each egg possesses something unique and is part of a larger whole. 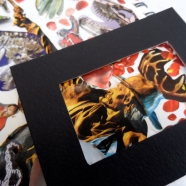 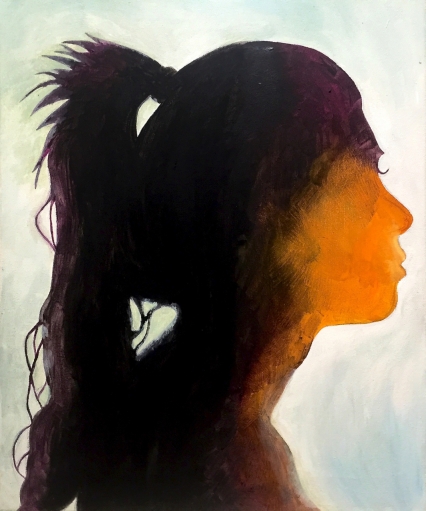 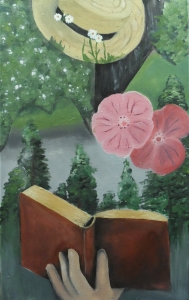 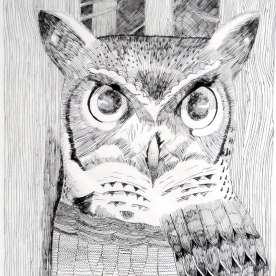 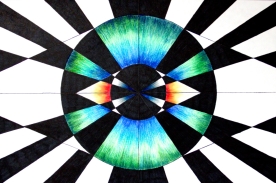 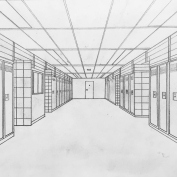 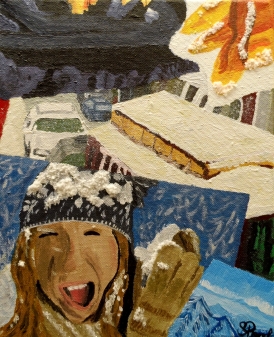 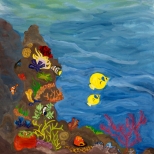